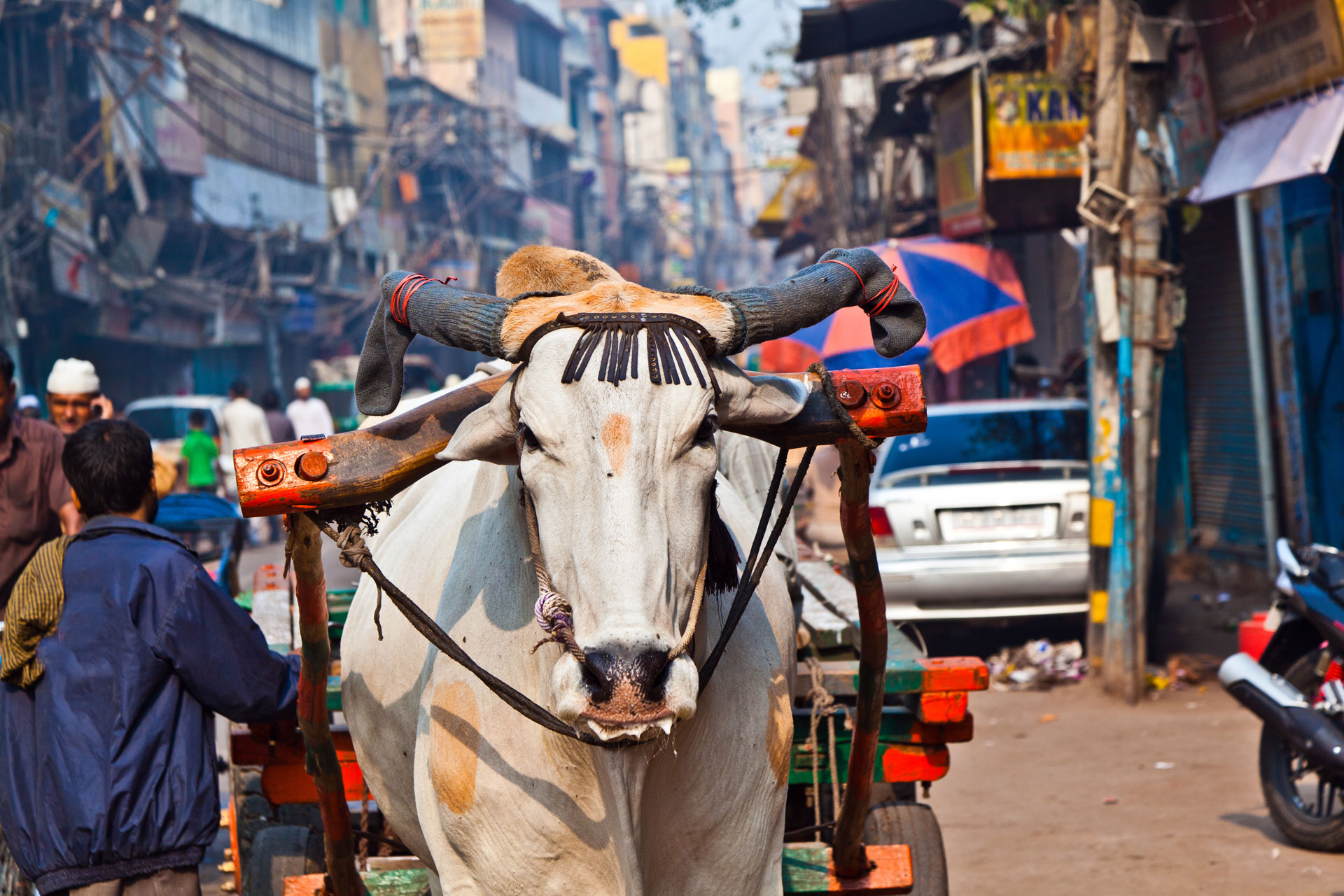 Upon arrival in Delhi you will be met and transferred to your hotel. Tonight, meet your tour leader and the rest of your group in the reception area of your hotel, for welcome drinks and a tour briefing. Please note it is common for international flights to arrive in Delhi late at night, so your tour briefing may take place tomorrow.

This fascinating city has many faces, from ancient alleyways and monuments of Old Delhi to regal New Delhi. Today, we begin our exploration of this historic city, of over fifteen million people, with a drive to the Red Fort. View this monumental 400-year old landmark from outside – a great opportunity for a photo. Then embark on a bicycle rickshaw ride through colourful Chandni Chowk – one of the oldest and busiest markets in Old Delhi and then to Delhi’s famous spice market, Khari Baoli. Afterwards, take a fascinating walk through the food street of Parathey wali gali, perhaps stopping to sample some local food or masala chai. Walk to the great mosque of Delhi, the Jama Masjid, said to be the largest mosque in India, dating back to the mid seventeenth century before continuing to the stunning Gurudwara Bangla Sahib to get a glimpse of Sikh worship. After lunch we visit the 16th century tomb of the Mughal emperor Humayun, with graceful architecture and recently restored ornamental gardens. This World Heritage-listed site provides an introduction to Mughal architectural style which reached its peak in the magnificence of the Taj Mahal. Drive past Rajpath – home to India’s government buildings and the President’s residence, all featuring graceful Lutyen’s architecture which characterises New Delhi, and India Gate, a memorial to Indian soldiers who gave their lives during World War One. Finally, end this memorable day with a look at Lodhi art district.
Insider Experience – Local: take a walk along one of Delhi’s most famous food streets where traditional methods are used to prepare delicacies such as fresh-baked paratha breads, samosas, chai and kebabs. Many families here have passed these traditions down through generations after serving as cooks to Mughal rulers of India, and some of the least impressive of shopfronts may hide the most celebrated cooks of particular recipes.
Breakfast included

This morning we depart Delhi, taking the short flight to Varanasi. Drive straight from the airport to Sarnath, a complex of stupas and temples where more than 2,500 years ago Buddha gave his first sermon, and which now attracts Buddhist pilgrims and other visitors from around the world.
Insider Experience – Local: explore the vibrant trading streets of Varanasi’s old town, where lanes are so narrow vehicles are unable to gain access, before continuing to the city’s famous riverbank to embark on a boat ride along the ghats for a fantastic view of the evening aarthi ceremony where Hindu priests stage a spectacular offering.
Return to your hotel after observing this fascinating ceremony.
Breakfast and lunch included.

Rise early to experience this unique city. Take a stroll along the ghats before commencing a boat trip to witness spectacular scenes. Enjoy free time after your early morning touring before taking a trip in the afternoon to a local ashram, to gain an understanding of what life is like in an ashram for many devotees throughout India.
Insider Experience – Unique: Rise early for a misty dawn boat ride on the holy Ganges, where thousands of Hindus bathe daily.
At the riverside we will board small boats, and from the river we have the perfect spot to watch the colourful ghats slowly come to life, as pilgrims begin to bathe themselves in the holy river and offer prayers as the sun rises – a sight believed to have changed relatively little for a millennia. Not only is Varanasi reputed to be one of the oldest cities in the world, it is also one of India’s holiest sites. For any Hindu to die in Varanasi represents a chance to attain liberation from the cycle of birth and death, and smoke from the cremation ghats can be seen rising all hours of the day and night. Enjoy the sounds of a local musician on board your boat to add ambience to your journey.
Insider Experience – Taste: try a local chai, and if you like a freshly-fried samosa, in one of the many typical riverside tea houses popular with pilgrims and other visitors rising before the sun for prayers and reflection at the Ganges.
Breakfast included

After breakfast, fly to Delhi before driving approximately 4 hours to Agra. Time permitting, watch the sunset with a view of the Taj Mahal from Mehtab bagh gardens or take a short street walk around Agra with your tour leader.
Breakfast included.

Rise early to see the magnificent Taj Mahal at dawn. Commenced by Emperor Shah Jahan in 1631 and completed in 1653, it was dedicated to his beloved second wife, Mumtaz Mahal, who tragically died in childbirth. Enter through the West gate with its arch framing and revealing the beauty of the Taj within. Take time to marvel at the Taj’s unique and stunning symmetry, and the exquisite pearly marble, bathed in the pink light of dawn. Explore many perspectives from the platforms, pavilions and gardens around the main tomb, and the marble walls decorated with a myriad of semi-precious stones in the ‘pietra dura’ inlay work. Later, return to your hotel for a late breakfast.
After checking out tour Agra’s imposing fort on the banks of the holy Yamuna River. Built by Mughal Emperor Akbar in 1565, it was also home to Emperor Shah Jahan, who built the Taj Mahal and was later imprisoned here by his son. We then drive to Jaipur.
Breakfast included.

Begin today with a visit to the milk market and gain an insight to a farmer’s daily life. Continue on to admire the striking façade of the Hawa Mahal, the Palace of the Winds, designed for the royal ladies to watch the processions and daily life of the city without being seen themselves – a result of the strict “purdah” which was observed until the 20th century. The impressive Amber Fort, around twenty minutes’ drive outside Jaipur itself, is our main site for the morning This imposing fort is situated atop a mountain in the midst of stark and dramatic landscape and dates back to 1592. You will drive up to the fort by jeep and explore the various buildings. Marvel at the beautifully painted traditional Mughal doorways and the remarkable Sheesh Mahal with its thousands of mirrored tiles. Walk down from the fort and return to downtown Jaipur. The rest of the afternoon is at leisure to continue your exploration of Jaipur.
Insider Experience – Unique: see a local milk market come to life, with turbaned farmers cycling their fresh milk in and haggling over prices and the day’s produce in ways little changed over the past century or more.
Breakfast included

Leaving Jaipur after breakfast, we spend the day travelling on good roads to Jodhpur. Another of Rajasthan’s great cities, Jodhpur is known as the ‘Blue City’ due to the many brightly-painted buildings traditionally signifying the home of a high caste Brahmin family. The city is dominated by one of India’s mightiest forts, the Meherangarh.
Breakfast included.

Begin today’s touring with a visit to the imposing Meherangarh Fort, surely one of India’s most impressive forts and a dominating feature of the city. You will enter via a convenient lift, installed by the current Maharajah, taking you up to the fort’s fine museum housing royal palanquins, elephant howdahs and regal costumes. The fort ramparts offer stunning views of the blue city below, out to Umaid Bhawan Palace where the royal family reside to this day.
Insider Experience – Local: walk from the fort down to the city’s colourful bazaar, famed for its colourful bangles and jutis, the stylish leather slippers favoured by locals and visitors alike. The bazaar is alive with Rajasthani colour and is a popular shopping stop for desert women from outlying communities.
Enjoy your afternoon at leisure or further explore the town of Jodhpur.
Breakfast included

Depart Jodhpur today by road for the village of Deogarh. Stroll the streets of Deogarh on a walking tour and gain an insight into daily life in such rural villages.
Breakfast included.

Leave Deogarh and drive to the celebrated temples of Ranakpur. Set in a picturesque hill location, the temple complex houses several Jain temples, produced from marble with intricate and beautiful carvings. After lunch nearby, continue to Udaipur by road. Check-in to your Udaipur hotel and perhaps take dinner in the nearby old town by the lake or explore the old city streets.
Breakfast included

This morning begin your city tour of Udaipur with a visit to the City Palace. The Palace has been added to over the years by various Maharanas (the mighty rulers of Udaipur), with residential and military sectors and sweeping views over town and Lake Pichola. Following the palace, stroll through Udaipur’s colourful market the Barra Bazaar. In the afternoon, you are free to explore or make last minute handicraft purchases before a sunset cruise on Lake Pichola past the fairy tale Lake Palace – the perfect end to your northern Indian exploration.
Breakfast included

Have a relaxing morning before checking out for your onward flight to Aurangabad. In the afternoon, you are free to do as much or as little as you please with an afternoon at leisure.
Breakfast included.

After an early breakfast, venture approx. 3 hours to Ajanta Caves. The Ajanta Caves have 30 rock cut Buddhists caves which date from the 2nd century BCE to about 480 CE. The caves also include a visual form of the life of Buddha and interesting stories from Jatakas. Later, make your way back to Aurangabad.
Breakfast included.

After breakfast enjoy visit of Ellora Caves. The Ellora Caves are listed in the world-heritage list. They are located about 30 km from Aurangabad. The Kailash Temple of the Ellora caves is the most attractive masterpiece of the creator. Visit Daulatabad Fort. Later, transfer to the airport for your onward flight to Mumbai – The city that never sleeps!
Breakfast included.

After breakfast, enjoy a heritage walk of Mumbai. Start from the Gateway of India where you will walk up Shivaji Marg past the members – only colonial relic Royal Bombay Yacht Club on one side and the Art Deco residential-commercial complex Dhanraj Mahal on the other visit the National Gallery of Modern Art.& David Sassoon Library, visit the Keneseth Eliyahoo Synagogue, continue walking towards St Thomas’ Cathedral before you end your walk at Churchgate station. This evening enjoy a farewell dinner at Konkon Café.
Breakfast and dinner included.

This morning you will be transferred to the airport for your onward flight to Delhi. Breakfast included