Madagascar is the fourth largest island in the world and an island-continent home to a large variety of landscapes from the thorny desert of the Deep South to the rainforests of the East as well as miles of coastline with dream beaches, cruising, sailing, and diving options. The coasts are always warm and sunny. Malagasy gastronomy is made of fresh products, and it is rice that the Malagasy love. And to drink? Rum of course!

Where do Malagasy people come from? When did Madagascar become populated? Some mysteries remain, but there are some certainties. It is from Asia, Indonesia, Polynesia that the first inhabitants of the island left. It was between the 10th and 13th centuries. A great crossbreeding followed with Arab and African contributions. The myth of the Vazimba, the original inhabitants of Madagascar, is still very much alive. Kings and queens succeeded one another for 4 centuries, the most famous one: Andrianampoinimerina who made the unity of Madagascar by decreeing that the sea is the limit of his rice field. As a French colony from 1900 to 1960, the country kept their language, part of its culture and strong economic relations. Today Madagascar is a republic of 25 million inhabitants led by a president elected every 5 years.

As far as religion is concerned, the island, although very basically animist, is mainly Christian with almost 50% of the population. On the coasts you can find the Muslims of Madagascar. Ancestor worship is highly practiced, highly respected and present in everyday life. The climatic seasons are simple: It rains from mid-December to the end of March with risks of cyclones. From April to end of November, it is the best time to travel to Madagascar. July and August are the winter months and it can be chilly in the early morning on the Highlands. The coasts are always warm and sunny. Malagasy gastronomy is made of fresh products. The meat is more likely to be zebu, grilled or in sauce. Fish and seafood will delight you along the coasts. Tropical vegetables and fruits are always on the menu. But the invariable remains rice. From morning to evening, from north to south, it is rice that the Malagasy love. And to drink? Rum of course! 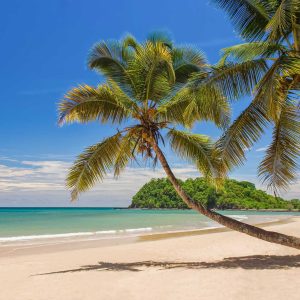 West Side Story & Nose Be

The amazing Tsingy in Bemaraha National Park. The Baobabs Avenue and the wildlife of Kirindy Reserve. Enjoy Nosy Be and the island of Nosy Iranja. 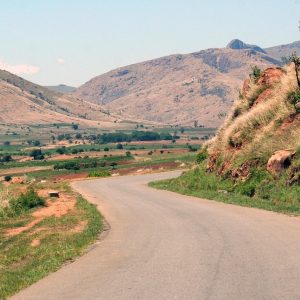 Enjoy the Tsiribihina River trip, the Tsingy of Bemaraha and the Baobabs Avenue. Experience five days trekking in the amazing Makay Mountains. Sharing great moments with your local guides and porters during the trek. 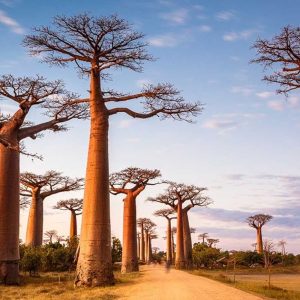 Meet Lemurs in the rainforest in Ranomafana National Park. Experience railway from the highlands to the east coast. Enjoy the wonderful lagoon facing your bungalow.

Nosy Be – The seaside spot par excellence with beautiful properties, sublime landscapes, charming neighbouring islands and a very relaxed atmosphere. Located in the Mozambique Channel, near the north-western coast of Madagascar, the island is also called Ambariobe (big island) by its inhabitants. Nosy Be holds a lot of surprises in store for visitors. Forests with exceptional fauna and flora, the Lokobe Park and some volcanic lakes.

The Tsingy of Bemaraha – An ancient coral reef which was transformed into a stone forest sculpted by water, wind and time. It is one of the most astonishing landscapes in Madagascar and part of the country’s largest natural reserve, the Tsingy de Bemaraha Strict Nature Reserve. Also, the park is home to seven Lemur species, which of one is the Deckens sifaka, known for its creamy white fur and black face.

Ranomafana National Park – Located in the south-eastern part of the island, this is the country’s most popular national park. The landscape in the eastern part of the park is the most scenic, covered by densely forest hills, traversed by countless streams. Numerous birds, butterflies, bats and lemurs are living in this park, which of one is the endangered bamboo lemur.

Baobabs Avenue – 7 species of baobab trees are present in Madagascar, some are up to 800 years old. Along the dirt road between Morondava and Belon’i Tsiribihina in western Madagascar, these trees are one of Madagascar’s most-seen attraction. They did not originally grew in isolation but stood in a dense tropical forest decades ago. The forest was cleared over the years for agriculture, leaving only these famous trees.

Andasibe-Mantadia – Split into two areas, the Mantadia National Park and the Analamazoatra Reserve, this national park is located near to Madagascar’s capital city. The forests of Andasibe-Mantadia impress with moist moss, ferns, trees of impressive heights and more than a hundred species of orchids that bloom between September and January. The unbeaten highlight, however, is the country’s largest lemur, the Indri.

The Malagasy Highlands – From Tana, the capital, southwards on the Route Nationale 7, they stretch across the centre of the island. At an average altitude of 1,300m, it is the emblematic landscape of Madagascar with its rice terraces and small villages with red earthen houses and their thatched roofs. The atmosphere is one of pastel colours and shimmering light. An amazing road trip.